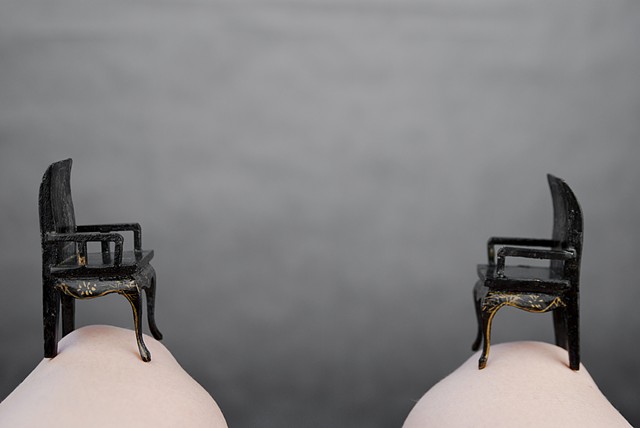 The works presented are from a series of photographs exploring features of the human body presented as landscape by introducing miniature objects and figurines to shift scale. While the body is often associated with movement and implied narrative, it is a passive environmental feature in these compositions. The body is the earth, a home, a setting within which vulnerabilities and fleshly tensions ultimately dictate the routine activities of daily life. The existence of the body is forgotten for a moment and then remembered as the viewer is pulled between the figure and the ground, which are literally reversed. The dollhouse furniture within these scenarios are the actors and invite the viewer to complete the picture. For me, they are expressions of loneliness that come with honoring my need for solitude that I believe comes from growing up as an only child. In some images the figure disappears entirely, and in these I am working to create a sense of watchfulness, a sense of presence or consciousness that is palpable even when there is no human visibly present. Often as a child, I was convinced that my toys were alive, that they had a consciousness of some sort, which I don’t think is rare. These are still life images but in the moment of creation they are play, and therefore utterly alive for me. Somehow, through the picture making process, these places I have travelled become more real than I imagined, I now have evidence that it truly exists, not just in my mind but for others as well.